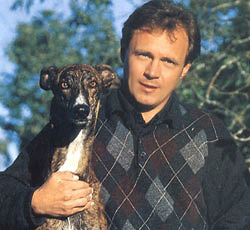 Approved by the Norwegian Kennel Club and FCI to judge at international championship show level:

Born into a family where greyhounds have been part of everyday life since 1955, Espen has been very actively involved in the dogs from a very early age. The first litter carrying the prefix Jet’s was bred by Espen and his late mother Kari in 1975.

The Jet’s are the top winning greyhound kennel of all time, having made up 209 individual homebred champions with more than 760 champion titles in 62 different countries, including 95 FCI International champions. Over the years 47 individual homebred Jet’s greyhounds have won Best in Show and Jet’s greyhounds have won 42 national specialty BOBs. The Jet’s bitch line includes a unique nine consecutive generations of Best in Show winning international champion bitches. Jet greyhounds have won 40 national or parent club specialty BOBs. Int.Ch. Jet’s Once Upon A Dream was Norway’s Dog of the Year in 2001, Int.Ch. Jet’s Something In The Way U Smile in 2003, Int.Ch. Jet’s Just Take Me Home Tonight in 2013 and Int.Ch.Jet’s Man in the Moon in 2016.

Espen has imported several international champion Whippets and has also co-owned several Afghan Hounds champions with his life partner Åge Gjetnes. Their latest venture is Griffon Bruxellois where several Jet’s homebred champions have been made up, including the first ever English and American champion bitch in the breed. Espen was Top Griffon breeder in the UK in 2017. Åge won the group at Crufts 2015 with his home-bred Miniature Poodle.

He is approved to judge 98 breeds with CCs by The Kennel Club (London), all groups and Best in Show. Appointments include more than a dozen breed club championship shows over three groups, Best in Show at the Hound Show 2010, at Welsh Kennel Club 2012 and all groups and BIS at Leeds 2014, BIS at Bournemouth 2016 and Belfast 2017.

Appointments include fourteen FCI World shows. He judged at Crufts for the 6th time and is appointed to judge the Hound group there in 2021. Espen judged at Westminster K.C. for the 3rd time in 2017.

A veterinarian by education, Espen finished his Doctoral Thesis at the Norwegian College of Veterinary Medicine, was for years associate professor of comparative medicine at the University of Oslo and more recently Chief Executive Officer of the Norwegian Kennel Club. Currently he is Director General of The National Committees for Research Ethics in Norway.